My name is Lois MacNeill, and I’m the QA Development Manager for Other Ocean Interactive and Sculpin QA. As we get down to the final weeks before releasing Giant Cop: Justice Above All we can’t help but be a little retrospective (when we can find the time!).

Personally, one of my favourite parts of this job is being able to get my grubby fingers on the latest and most exciting tech – often well before the general public gets a chance to. VR has been long-anticipated by many video game enthusiasts, and watching Giant Cop evolve in concept from a normal PC game to a fully-immersive VR experience has been nothing short of a dream come true.

The collaborative nature of game development means that Giant Cop belongs to all of us, and none of us at the same time. As a team, we all have a piece of ourselves in this project, whether it’s a piece of art, voice-over, a line of code, a design choice, or a bug that’s no longer there. Testing on VR has certainly forced us to think outside the box, and brought us to new highs and lows… literally… 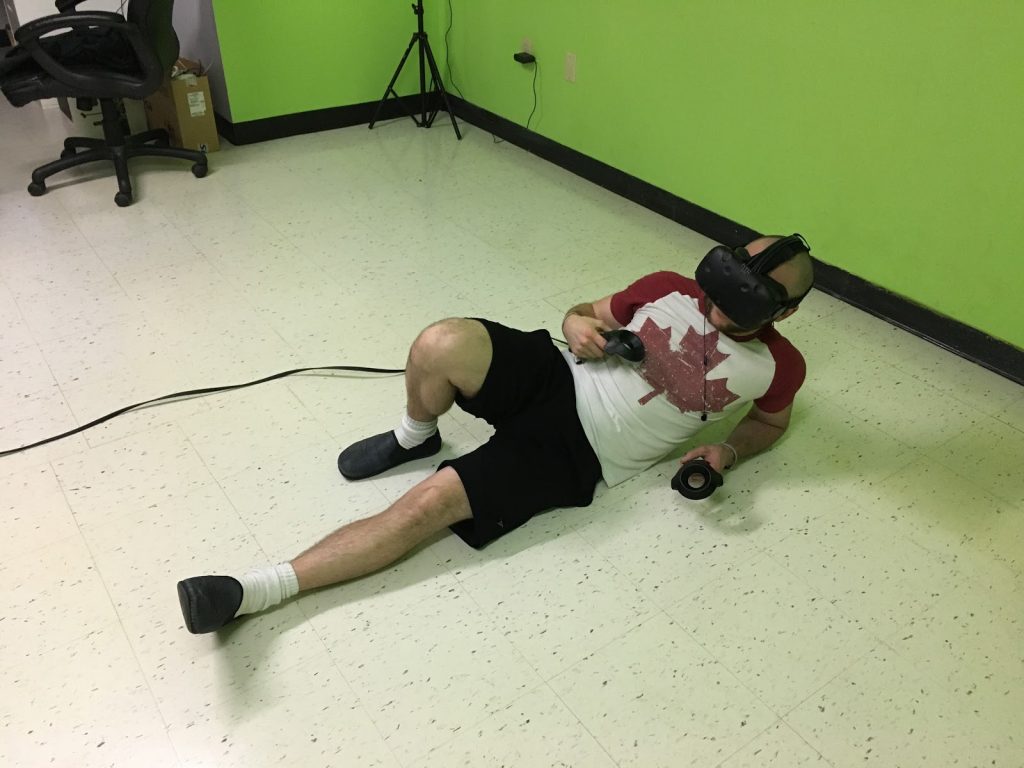 We’re so excited to hear what people think and watch others play it for the first time. We’ve loved testing this game, through thick and thin, and rarely get a chance to learn so much from a single project.

Here are some quotes from the Giant Cop QA team that reflect their experience:

“A giant in a world of relatively tiny people, I enforce the law by throwing citizens into Jail (literally), this is a one-of-a-kind experience and is as fun as it sounds. Being a tester on the game has provided me with an opportunity to see a new world being developed in another reality..”

“I lucked out in having Giant Cop be the very first VR game I got to test. It’s not a complicated game, but it is extremely immersive. I still find myself getting sidetracked by many of the toys when I should be testing. I know standing up is the best way to feel like a ‘Giant Cop’, but there’s something about sitting right down onto my knees that makes me feel like I’m a kid again, playing with toys that move on their own and respond to what I’m doing. Sometimes while testing, I still walk around buildings…because I forget they’re not

“The biggest difference between VR testing and any other platform is that you can override collision. The usual game constraints that stop you from going through buildings just don’t apply when you have a real headset in a real space.”

“It’s like being a kid when you can sit down and play with tiny people and cars in your own world.”

“Testing for Giant Cop was a neat experience.  Being submerged in a VR world is always fun, but then being able to see over buildings and interact with tiny people was something special. While testing I got to try the mechanics as they became available, and when something worked, it was exciting. And even when it didn’t, the great ideas were exciting as well!”

“Testing Giant Cop is a strange thing to describe. It’s often easy to look at a screen and find the flaws with a flat image, or in a game mechanic, but putting yourself in a whole new world is a completely different experience. Suddenly you’re in a large open 3D space, with people running about, cars and planes zipping by, and you’re tasked with finding out what’s wrong with the picture. It takes a moment to even get accustomed to what’s happening around you, and often I found myself getting more caught up in actually playing the game, than I did in testing. It’s certainly unlike anything I’ve experienced “

“Giant Cop is the second VR title I’ve personally tested. Ultimately I’ve found that the principles behind the testing remain the same when compared to games on other platforms. The main thing that has changed is the scope of how the user performs input and interacts with the software. The most interesting thing I’ve noticed is that the testers who are best suited for VR testing are ones who are in relatively good shape, as doing a full day of testing requires a lot of body movement which can lead to fatigue or exertion.”

“Giant Cop felt like being pulled into a living abstract reality.  The level of immersion afforded by VR allowed me to feel like I had been integrated into the world of Giant Cop,  which also made it easier to accept that altered reality since I could easily interact within that world.  Feeling like I was testing from within the game was a whole new level.”

“The pace/style of the game where you get to explore and interact with objects and the environment made testing Giant Cop a treat. When I started testing, the game was already kinda solid except for the voice-overs, which were still the placeholder robot voices. These were recently updated to the actual voices which made a big difference in my playing/testing experience, you get into it a lot more. The one thing I’ve really noticed while being on this project I really started to feel really comfortable testing VR games as you get familiar on what you can and can’t do.”

To say that we’ve found new challenges in VR would be understating the truth. But with new challenges come new ways to adapt and new ways to feel fulfilled in what we do. Every time a new technology appears, we get to become explorers and discover all the possibilities that come with that technology (and how to break them). We can’t wait to see what’s coming next.